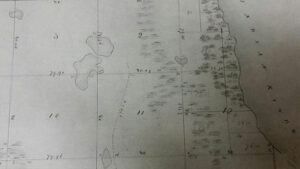 The Ais Indians were some of the first inhabitants of Brevard County.  They were here when the Europeans began to explore Florida in the 16th century. Ponce de León stopped in Ais territory in 1513. The Ais stayed in this area because of the warm climate and the plentiful food from the ocean. They were non-agricultural, surviving on fish, shellfish, manatee, deer, and plants. Their houses were wood with palmetto thatched roofs. They were feared by neighboring tribes and the Europeans because they were known to be cannibals. Shipwrecked Spanish sailors were afraid of the Ais because they were “inhospitable.” It is thought that a few Ais survivors may have emigrated to Cuba when Spain left Florida in 1763.

The historic Hernandez Trail went right through the 114 acres. The Enchanted Forest Sanctuary, of the Environmentally Endangered Land program, has a part of the Hernandez Trail which was cut in 1837 by the army under General Joseph Hernandez during the Second Seminole War. His troops followed old Indian trails that were on high ground now called the Atlantic Ridge which is about a mile wide and averaging 30 feet above sea level. The road went from St. Augustine to Ft. Pierce, connecting army forts. There is a historical sign on Hwy 520 in Cocoa that says the trail went ½ mile west of US 1. The housing subdivision to the north of the 114 acres, Capron Ridge, has a trail marker for the Capron-Hernandez Trail. The 114 acres is about ½ mile west of US 1. A visit to the Cocoa Historical Society uncovered an 1844 land management survey that shows the historic Hernandez Trail going right through the middle of plots 2 and 11, which are the 114 acres. The road was used for many years while settlers moved into Florida.

No Indian archeological finds would be there now since the 6 Rapid Infiltration Basins were built 30 years ago, and the land was dug up then.

The history of the area includes a 1944 photograph showing scrub plants on this land.

Major General Thomas Jesup had fought in the War of 1812. President Andrew Jackson, former governor of the Florida territory, tasked him to get rid of the Seminoles in Florida. It was the country’s first large scale guerilla war. In the winter campaign of 1837, Jesup came up with a plan to divide the army into four columns, all heading south in Florida. The total force of the four columns was about 9,000 men. General Joseph Hernandez’s troops were divided into two columns that took the area between the St. John’s River and the Atlantic Coast heading to Lake Okeechobee.

Brigadier General Hernandez is known especially for capturing Chief Osceola and Coa Hadjo on orders from General Jesup. On October 21, 1837, Hernandez left St. Augustine with his army column to meet Osceola. Osceola’s camp, seven miles away, had raised a white flag, not of surrender, but of a truce. Hernandez had orders to read the message from General Jesup and interrogate them with many questions. When Osceola didn’t answer, likely due to not understanding, Hernandez had orders to arrest them and take them to Ft Marion prison which was the Castillo de San Marcos. The soldiers quickly surrounded Osceola whose men didn’t have time to react, and if they had, they would all have been killed. Instead, the army captured 95 Seminoles and marched them back to St. Augustine where Hernandez paraded them through the streets. Chief Osceola was ill at the time with malaria and quinsy. He died on January 30, 1838, at 34 years old, at Ft. Moultrie in Charleston, SC. He was the most famous Native American, and a martyr and hero among the Seminoles. (Osceola and the Great Seminole War)

Major General Thomas Jesup’s order to capture Osceola stained his reputation. “There can be no question that the controversial capture of Osceola under a flag of truce stands to this day as one of the most disgraceful acts in the American military history.” (Osceola, p 221) In Jesup’s defense, he listened to his subordinates, General Eustis, Colonel Twiggs and other officers who urged him to write War Secretary Poinsett asking for a change in policy. On February 11, 1838, he wrote, “My decided opinion is, that unless immediate emigration be abandoned, the war will continue for years to come, and at constantly accumulating expense.” (Seminole Wars, p 146) His letter took two weeks to arrive in Washington. Before he received Poinsett’s answer to continue the offensive to capture or destroy the Indians, Jesup pleaded again, “To persevere in the course we have been pursuing for three years past would be a reckless waste of blood and treasure.” (Seminole Wars, p 147) Interestingly, Poinsett had been the country’s first ambassador to Mexico who brought the Poinsettia plant to the US. Poinsett was following the policy of former President Andrew Jackson. Van Buren was the president in 1838, but Jackson was still very influential in politics. Van Buren and Poinsett, under Jackson’s influence, were not going to go back on the Indian Removal Act because admitting the policy was an error was unthinkable. The Seminole War continued “as Jesup had warned, with a ‘reckless waste of blood and treasure’.” (Seminole Wars p 150)

How often since 1838 have wars continued due to the same mindset?

We are a 501(c)(3) nonprofit acting as caretakers to 114 acres of land in Brevard County. Our vision is to use this land to discover, study, and teach about Florida’s plants and animals to help sustain and enrich lives.

HUNDRED ACRE HOLLOWS, INC IS DULY REGISTERED WITH THE STATE OF FLORIDA AS REQUIRED BY ITS SOLICITATION OF CONTRIBUTIONS ACT. OUR REGISTRATION NUMBER IS CH52596. A COPY OF THE OFFICIAL REGISTRATION AND FINANCIAL INFORMATION MAY BE OBTAINED FROM THE DIVISION OF CONSUMER SERVICES BY CALLING TOLL-FREE (800-435-7352) WITHIN THE STATE. REGISTRATION DOES NOT IMPLY ENDORSEMENT, APPROVAL, OR RECOMMENDATION BY THE STATE.

If you are looking for some #tranquility and #rela

Beauty is all around us! Enjoy #floridaflora and #

Hundred Acre Hollows are enjoyed by many birds. He

This big guy came out to enjoy the "Sunset at the

What a #beautiful evening at the Hundred Acre Holl

Join us for "Sunset in the Hollows" this Sunday, J

Have you ever wondered what Hundred Acre Hollows l

This Gopher tortoise hatchling was hanging out tod

This pretty Laurel Oak was growing under the invas

What a productive day at Hundred Acre Hollows toda

Join us for "Sunset in the Hollows" this Sunday, J

Do you know what this is? It's a little oak tree c

This big gopher tortoise was out eating today arou

Calling all local bats!!! 🦇 We have 4 beautiful

This #hogplum bush is native to tropical America.

How cute is this little #pineapple plant living in

We promise not to spam you, and we will not sell your email address.